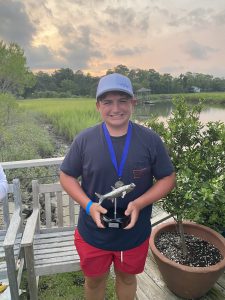 J.C. Lewis Serves was proud to join 51 other captains and their anglers for a day on the water benefitting St. Joseph’s/Candler Foundation.

Each year Captain’s are giving a choose your day to fish.  The alternate day they are encouraged to register their Junior Angler for his or her own day on the water.

The John A. Peters Jr. Memorial Tarpon Tournament is hosted out of Savannah, Georgia by Release Marine, Inc. The JAPTT’s purpose is to benefit the local community by bringing together the community as well as charitably donating to a worthy local organization.  The John A. Peters Jr. Memorial Tarpon Tournament is a catch and release tournament that is in it’s 7th year. This annual tournament is becoming a staple in the Savannah area among fisherman.  Each year the proceeds from the tournament go to a worthy organization in the greater Savannah area. The 2017, 2018 & 2019 proceeds were donated to St. Joseph’s Chandler Foundations earmarked for Cancer Research.

No images found!
Try some other hashtag or username