We Can Do It! J.C. Lewis Learns a Valuable History Lesson 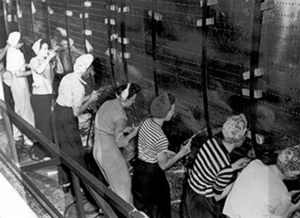 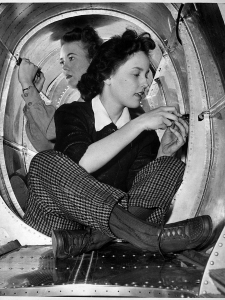 “From the days of Rosie the Riveter, UAW members have stepped up during difficult times in this nation’s history for the good of us all,” said UAW International President Rory Gamble.

The iconic Rosie the Riveter, who worked at Ford’s Willow Run Plant, may seem to be simply a fiction from the past, but she is not a myth. She is an integral part of American history. Rosie represented a group of Americans who heard the call to take action to lend a hand when America had a tremendous need for labor. “All the day long, Whether rain or shine, She’s a part of the assembly line. She’s making history, Working for victory, Rosie the Riveter. The Rosie the Riveter song, penned by Redd Evans and John Jacob Loeb, first hit airwaves early in 1943, coining the term Rosie for Rosie the Riveter.

Much like today American’s have converted their business to fight COVID-19, Rose Will Monroe moved from her home in Pulaski County, Kentucky as part of the great migration to Ypsilanti, Michigan to participate in the greatest national cause of the 20th century, the defense of freedom and liberty in World War II. Rose, aka “Rosie” was part of the 40,000 employees at the Ford-run Willow Run B-24 bomber plant and part of the great Arsenal of Democracy that Detroit and the Southeastern Michigan region became, cranking out airplanes, tanks, trucks, and weapons.

Rosie and thousands of other men and women rolled up their sleeves with the “can do” attitude necessary to bring victory to America and her allies. And the story of Willow Run, where she worked, is as fascinating as it was productive. Encompassing 3,500,000 square feet under one roof, making the facility then the largest factory in the world. Construction began in June of 1941, while the first airplane left the assembly line in September of 1942.

Between the draft, enlistments, and a general shortage of skilled workers, many of the male workers either could leave for other opportunities or be made to leave for the war effort. Turnover was an enormous issue. During one month, Ford hired 2,900 workers but 3,100 workers had left. In the end, women, who collectively became known as Rosie’s not only at Willow Run, but throughout the country, were strongly recruited and appreciated, to the point that Rosie’s made up 36.5 percent of the assembly workers in the aircraft industry. While these ladies who fought on the home front are in their nineties by now, you can see their spirit of cooperation and perseverance is vibrant and alive in America in 2020.

What was once said about Ford’s efforts in WWII rings true today, “Ford and its teams of engineers, planners, and administrators; and the supplying firms all worked together in common cause against a common foe.” However strong the obstacle Ford is dependable to enlist and bring innovation and efficiency.

Willow Run was an American production miracle. Henry Ford, his engineers and builders, and the dedicated workers that flowed into Michigan from every state and territory, proved that not only could bombers be built on a line, they could be produced at the astonishing rate of one per hour. Previously, it took about one month to build one bomber. Willow Run was not only a pioneer in innovation to meet America’s demand, it also was front and center for the social change in an unprecedented era of expanded opportunity for men and women. Willow Run employed 42,000 workers, including an remarkable percentage of women factory workers. Ford was also known for equal pay for equal work in this era and led and the groundwork for sweeping social change.

Since March of 2020 Ford has developed new powered air-purifying respirators approved by the U.S. Centers for Disease Control and Prevention’s National Institute for Occupational Safety and Health. Ford has produced more than 400,000 reusable surgical gowns manufactured from material used to make airbags and other durable fabrics, and shipped them around the U.S. In addition, the company makes more than 1.5 million face shields a week and has shipped more than 14 million shields to all 50 states plus Puerto Rico and Guam.

“We applaud Ford for its efforts to lend its manufacturing capabilities to help quickly scale the Airon-licensed Model A-E ventilator and arm clinicians in the fight against COVID-19,” said GE Healthcare President and CEO Kieran Murphy. “Our deep understanding of the health care industry with Ford’s supply chain and production expertise will help meet the unprecedented demand for medical equipment. We continue to be encouraged by how quickly companies are coming together in innovative ways to address this collective challenge.”

Ford chooses to invest more in America than any other automaker in part because of its rich history here. “There are a lot of parallels between how the company and the country face and ultimately overcome challenges,” Galhotra said. “It’s not easy, and it’s not always comfortable, but we don’t back down. We will work hard to come back” aiming to be even stronger than before.”

Ford resumed production and operations in the United States May 18, 2020. Ford has implemented robust safety and care measures globally to help support a safe and healthy environment for the company’s workforce, including health assessment measures, personal protective equipment and facility modifications to increase social distancing.

“The auto industry is the backbone of America’s economy, and we’re proud of our workers’ resolve and dedication to quickly pivot and produce life-saving personal protective equipment during the coronavirus, making a real difference when the country needed us,” said Kumar Galhotra, Ford president, Americas and International Markets Group. “Now Ford is ready to lead the way in safely restarting our U.S. factories, reopening other facilities essential to delivering the vehicles our customers need and doing our part to help restart the country.”

An estimated 10 million workers in America are employed by automakers, their suppliers, dealers and related businesses. Vehicle sales and service, plus incomes and government revenue generate $953 billion annually in the country. “Autos are the engine of America’s economy,” Galhotra said. While we must do so safely, it’s time for us to start running again while remembering those who helped keep us in the race.”

This pandemic has reveled the necessary passing of the torch from Rosie the Rivotor’s of WWII to today’s generation and revealed a tradition of excellence from Ford Motor Company.

For future generations it is ideal that Ford’s legacy will again provide inspiration and a road map for success for innovation and cooperation.  While this pandemic has been devastating at times there have been stories of inspiration.  Looking back to history and knowing, “the little girl on her tricycle picking up scrap metal was considered a Rosie during WWII,”  brings confidence that the children at home virtually learning during COVID -19 will develop resilience and an appreciation for the power of unity and sacrifice.  Ford takes pride in its role in the manufacturing shift for protection, values the sacrifice of the front line workers and knows Ford is here for a “reason bigger than building cars.”

Ford is Built for America.  https://www.youtube.com/watch?time_continue=35&v=XxTUzCxeGho&feature=emb_title 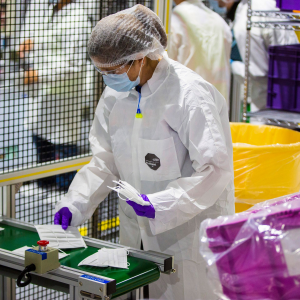 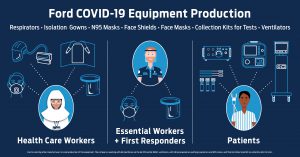 J.C. Lewis Celebrates Those Who Serve